I have always thought my children were so lucky to have grandparents nearby.  It’s nothing for them to walk up the hill and sneak ice cream from one set of grands, or take a twenty minute drive up the mountain to spend the night (or two or three) with the other set.
Oh!  Honey, at the sweet memories they have made over the years!
These are the moments I hope my kids treasure for a lifetime.  I never had the opportunities to know my grandparents the way my own children (and even my Audley) have, and I hope that they value the relationships they have.  I had lost three of my grandparents by the time I was eleven, and lost my dear Grandmother when my sweet Samantha was five and Kenzie Grace was just ten days old.
“Grandchildren are the crown of the aged, and the glory of children is their fathers.”
Proverbs 17:6
Grandparents are definitely special people!
But, I don’t let my children keep the grandparents to themselves.  I love nothing more than to have them in our home for dinner and to spend time with them as well.
I had planned to do the final mowing of the season on Monday, but it rained.  My daddy called and asked if it had rained enough that I was cooking supper for them.
Now, I am not going to tell my daddy “No Sir” to supper, so I said “come on over!”
Several days earlier I had found a great looking recipe in October’s edition of Food & Wine magazine, so having company for supper seemed like a great time to try it out.
And just in case it didn’t taste as good as it looked, I made an apple pie for dessert.
Lyon Style chicken with Vinegar Sauce (adapted from Food & Wine)
10 pieces of chicken, bone in (I used legs and thighs)
3 Tablespoons unsalted butter
8 large garlic cloves
1 bay leaf
1 cup red wine vinegar
2 cups chicken stock
1/4 cup creme fraiche
Preheat the oven to 450 degrees.  In a large cast iron skillet, heat the oil on the stove.  Season the chicken with salt and pepper, add the chicken to the skillet and cook over medium high heat until browned.

Add 1 tablespoon of the butter to the skillet and swirl to coat the chicken.  Turn the chicken skin side up and add the garlic and bay leaf. 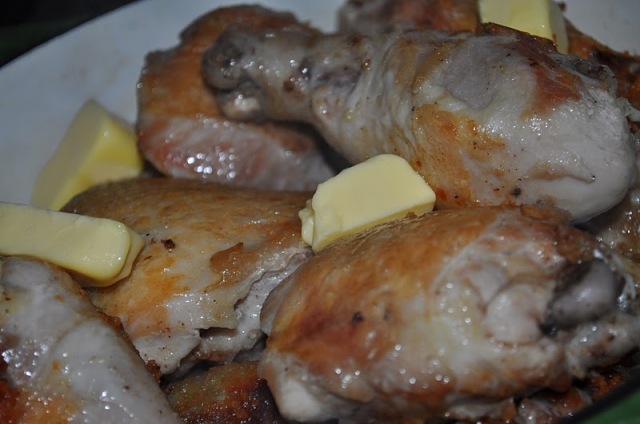 Season with salt and pepper and serve it with steamed white rice or a crisp salad.
As for the apple pie, it wasn’t needed to save supper, and though we were all stuffed beyond belief, we ate it anyway.  The real memories of the night though, were sitting around the table with my parents and four children, counting my blessings as they laughed and talked.

Of course watching my dad devour six biscuits smothered with my homemade strawberry jam was pretty sweet as well!
Linking up for Foodie Friday this week.  Click on over and see what everyone else is cooking!