I love a simple one-dish supper, especially when I’m having one of those days that seems never-ending.  While waiting on Madeline to finish track practice a couple of weeks back, I found a recipe for Vinegar-Braised Chicken in Food & Wine mag. that really sounded good with the exception of the green peas.
Now I am not a picky person; I even eat turnip greens or an occasional brussel sprout, but I despise green peas with every fiber of my body.  I can’t stand the smell, the taste, or the texture.  I pick them out of vegetable soup and don’t even think of hiding them in my mashed potatoes.
“Would you like them
Here or there?

Dr. Suess
Now that I’ve cleared the air on my issues, let me share the solution because I really wanted to fix this chicken dish.
I used black-eye peas.
But, that wasn’t the only substitution I made.
I used sour cream in the place of creme fraiche’ because I am on a “don’t-go-into-the-grocery-store -unless-it-is-grocery-day” kick, and I already had all of the other ingredients on hand.
{Do you ever get that way?}
So while the initial recipe was in Food & Wine, it has been reconstructed by Jen.
And the family L.O.V.E.D. it!
So, complete with my alterations, here is my recipe.
Vinegar-Braised Chicken with Leeks and Peas
8 Whole Chicken Legs
Salt
Freshly ground pepper
5 tablespoons unsalted butter
3 tablespoons extra-virgin olive oil
3 large leeks, halved and cut into 1-inch pieces
1 cup low-sodium chicken broth
12 cup white balsamic vinegar
1 14-ounce can black-eye peas, drained and rinsed
2 tablespoons chopped tarragon
2 tablespoons chopped parsley
3/4 cup sour cream (I used reduced fat)
1) Preheat the oven to 425 and place your rack in the upper third of the oven.  Rinse your chicken and pat dry.  Season the chicken generously with salt and pepper.
2) Heat two large nonstick skillets (notice I didn’t say one pot,  just one dish earlier), putting half of the butter and olive oil in each one.  Add the chicken and cook over high heat until browned, 5 minutes.  Turn and cook the other side for another minute.  Pile all of the chicken into one skillet.
3) In the other skillet, cook the leeks over high heat until just beginning to soften, about 2 minutes.  Add the broth and vinegar and bring to a boil.  Season with salt and pepper.  Pour the mixture into a medium roasting pan.
4) Set the chicken on the leeks, skin side up; roast until cook through.  Turn on the broiler and broil for about 2 minutes, until the skin in crisp and golden.  Transfer the chicken to a platter.
5) Place the roasting pan over a burner and boil over high heat until the liquid is reduced by half (act. 5 minutes).  Add the peas, herbs and sour cream, and simmer until the sauce is hot and slightly thickened (abt. 2 mins).  Season with salt and pepper.  Pour the sauce over the chicken and serve.
Dinner was on the table in about 45 minutes.  My kind of meal! 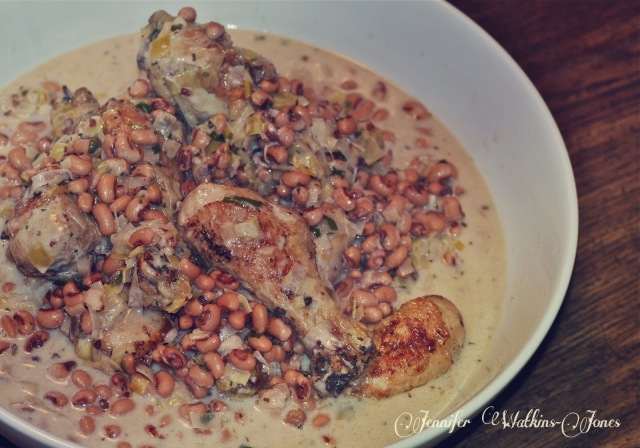 While I just served our supper with toasted baguettes, a crisp, green salad with buttermilk ranch dressing would go wonderfully with it.
And if you want to try the original recipe because you do like green peas, you can find it here.
But, it was delicious fixed my way. 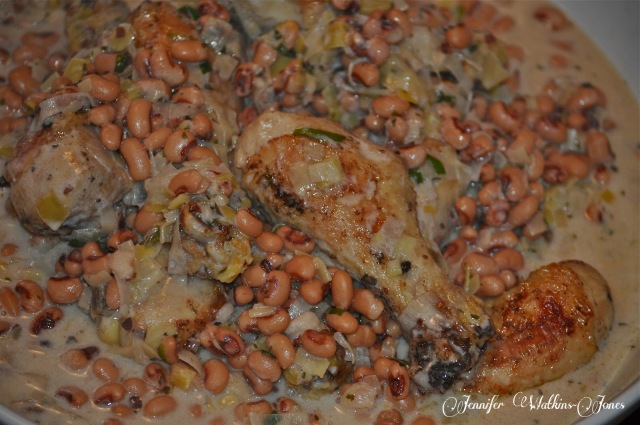 I’m linking up with Foodie Friday this week.  Be sure to check out what cooking elsewhere on the web!

I’m off to the National Cornbread Festival & the Lodge Cast Iron Cornbread cook-off in South Pittsburg, Tennessee this weekend.  It’ll be loads of fun that I can’t wait to share!  You can read about last year’s cook-off here.
Next week I am planning to share a little of the Lodge cast iron fun with a give-away.  I hope you will stop back by!