Like every other properly raised Southern girl it is my favorite time of the year; football season!  Team shirts and jackets are out, Saturday menus are planned, team platters are cleaned for use, and games are programmed into the cable box so we don’t miss a bit of action.

That’s college football in the south.  It’s a party.  It’s a tradition.  It’s a way of life.
For as far back as I can remember, Southeastern Conference football has been a part of my life.  Every Saturday our family ate hamburgers baked beans, and all the other trimmings as we tuned into Auburn football, and any other conference game that was not at the same time.  Over the years I have attended Southeastern Conference games at Samford stadium in Athens, Neyland Stadium in Knoxville, Vanderbilt Stadium at Dudley Field in Nashville, Jordan-Hare Stadium in Auburn, attended the Sugar Bowl when Georgia played in 2006, and drove to Columbia last fall to watch Navy play South Carolina.

Now that I am grown, married and have children of my own, very little has changed on any given Saturday afternoon in the fall.  Auburn is no longer the team of the house (except in the eyes of my warped children), but Saturday afternoon football is still the programming of choice.  We may keep it a family affair, or we may gather with friends to “tailgate” right here at home!

We’ve also taught or own girls to pick their team and cheer them on!

It’s our legacy as Southern girls!
And speaking of the importance of football in the south, here is a funny take on the differences between football in the south and north.
Football Season, North vs. South
WOMEN’S ATTIRE
Up North: Chapstick in their back pocket and a $20 bill in their front pocket.
Down South: Louis Vuitton duffel with two lipsticks, powder, mascara (waterproof), concealer, and a fifth of bourbon. Wallet not necessary – that’s what dates are for.
STADIUM SIZE
Up north: College football stadiums hold 20,000.
Down south: High school football stadiums hold 20,000
WEATHER
Up North: Snow and Ice.
Down South: Sunny, highs mid-60s, lows in the teens.
FATHERS
Up North: Expect their daughter to understand Sylvia Plath.
Down South: Expect their daughters to understand pass interference.
ATTIRE
Up North: Male and female alike: woolly sweater or sweatshirt, jeans.
Down South: Male – pressed khakis, oxford shirt, cap with frat logo, Justin Ropers. Female – ankle-length skirt, coordinated cardigan, flat riding boots, oxford. 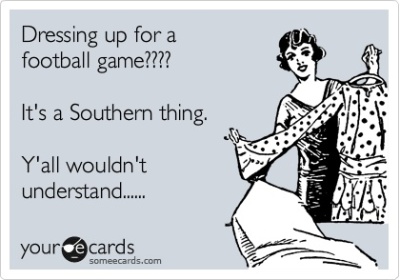 ALUMNI
Up North: Take prospects on sailing trips before they join the law firm.
Down South: Take prospects on fishing trips so they don’t leave for the NFL their senior year.
CAMPUS DECOR
Up North: Statues of Founding Fathers.
Down South: Statues of Founding Fathers and Heisman Trophy winners.
HOMECOMING QUEEN
Up North: Also a physics major.
Down South: Also Miss USA.
HEROES
Up North: Mario Cuomo
Down South: “Bear” Bryant
GETTING TICKETS
Up North: 5 days before the game you can walk into the ticket office on campus and still purchase tickets.
Down South: 5 months before the game you can walk into the ticket office on campus and still be placed on the waiting list for tickets.
FRIDAY CLASSES AFTER A THURSDAY NIGHT GAME
Up North: Students and Teachers are not sure if they are going because they have class on Friday.
Down South: Teachers cancel class on Friday because they don’t want to see the few hungover students that might actually make it to class on Friday.
PARKING
Up North: An hour or two before game time the university opens the campus for game parking.
Down South: RV’s sporting their school flags begin arriving on Wednesday for the weekend’s festivities. The real faithful begin arriving on Tuesday.
GAME DAY
Up North: A few students party in the dorm and watch ESPN on TV.
Down South: every student wakes up, has a beer for breakfast, and rushes over to where ESPN is broadcasting Game Day “Live” to get on camera and wave to the idiots from up North who wonder why game day is never broadcast from their campus.
TAILGATING
Up North: Raw meat on the grill, beer with a lime in it, listening to local radio station with truck tailgate down.
Down South: 30-foot custom pig-shaped smoker fires up at dawn. Cooking accompanied by live performance by Hootie & the Blowfish, who come over during breaks and ask for a hit off your bottle of bourbon.
GETTING TO THE STADIUM
Up North: You have to ask, “Where’s the stadium?” When you find it you walk right in with no line.
Down South: When you’re near it, you’ll hear it. On game day, it becomes the state’s third largest city.
CONCESSIONS
Up North: Drinks served in a paper cup filled to the top with soda.
Down South: Drinks served in a plastic cup with the home team’s mascot — filled less than halfway to ensure enough room for bourbon.
WHEN THE NATIONAL ANTHEM IS PLAYED
Up North: Stands are less than half full.
Down South: 100,000+ fans sing along in perfect 3-part harmony.
THE SMELL IN THE AIR AFTER THE FIRST SCORE
Up North: Nothing changes.
Down South: Fireworks with a twist of bourbon.
AFTER THE GAME
Up North: the stadium is empty before the game ends.
Down South: Another rack of ribs on the smoker. While somebody goes to the nearest package store for more bourbon, planning begins for next year’s party.
If you need a little inspiration for your game day menus you can check out this post here, or here.
Are you a college football fan?  Who is your favorite team?

3 thoughts on “Football in the South”