Between Baton Rouge and New Orleans, right on the Mississippi River, just off the beaten path is Vacherie, Louisiana.  It is common knowledge (& something I am teased about endlessly) in our home that I love the antebellum period of history.  Not the negatives of it all, but the beautiful architecture, the romance, the elegance of the ladies, a time where the hustle and bustle of everyday life did not exist as it does today.  Vacherie is the home to many beautiful and historical plantations that have survived from the early 1800’s thanks to historical preservationists and individuals and with my love for this elegant time, it was inevitable that Audley & I would visit one of the graceful homes while on our road trip.  Plantation row in Vacherie has so many wonderful places to choose from when visiting the area, but Audley and I decided to tour the most well-known, Oak Alley. 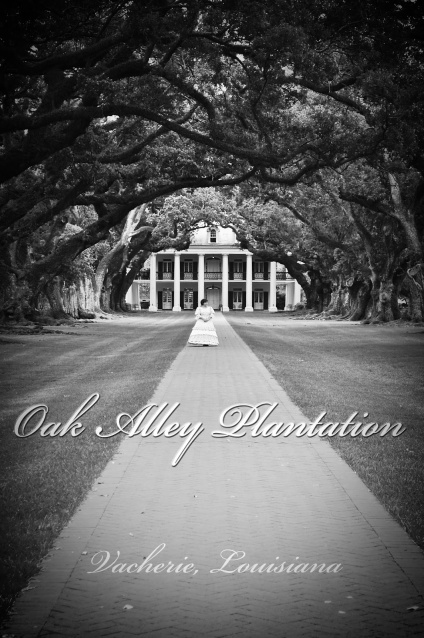 Over the years, Oak Alley has been featured prominently in several Hollywood films; Primary Colours with John Travolta, and more recently, Tom Cruise’s Interview with a Vampire are just two of the many.Oak Alley is most famous for the gorgeous row of 300 year old Oak trees that line the front walkway from near the Mississippi River to the old house that have withstood the tests of time from hurricanes to flooding to droughts.I admit, I find them very romantic and they played a large part in my reasoning to visit Oak Alley.

The original Oak trees were planted by an unknown settler to the area in the 1700’s and was honestly the selling factor when Jacques Telesphore Roman acquired this land (already a working sugar cane farm) in trade with his brother-in-law Valcour Aime to build a home for his wife, Celina, and at least one of their children in 1837.  He preferred this area to raise a family as he was NOT a fan of New Orleans and it’s immorality.  Despite all of the beauty and grandeur of Oak Alley, Celina was never really happy there (preferring the social life of New Orleans) and left Oak Alley after her husband’s death years later.

It took over two years to build the grand Greek Revival style home on the Mississippi among the Oaks, with finishing touches added through 1841. 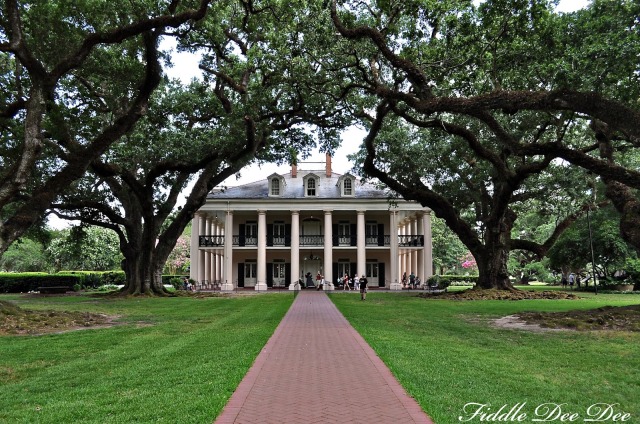 When you walk around the outside of the home and once inside you will notice that instead of windows on the bottom floor, French doors are in place.  They line up with doorways on the inside and in the summer months were opened up to allow for breeze and keep the house cool.  The walls are 16-inches thick and are brick both inside (covered with plaster) and out.  The bricks were made using all local material from the Mississippi River and were made by the slaves. 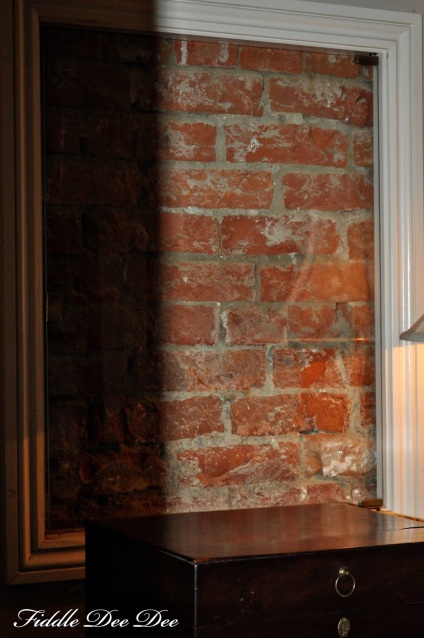 Windows and doors were brought up river via steamboat.  Flooring in the house was originally a beautiful marble but over the years was replaced with hardwood.

To visit the Roman family at Oak Alley in the 1800’s guests either traveled three days by horse and buggy from New Orleans or rode a steamboat up the Mississippi River.  Guests were not just dropping in for dinner and cards, but were coming to visit for days and even weeks!
The levee wasn’t built as high during this time period as it is now, so this beautiful estate was visible from the river.  As you can imagine when boats passed by or visitors arrived they were mesmerized by the beauty and elegance of this estate. 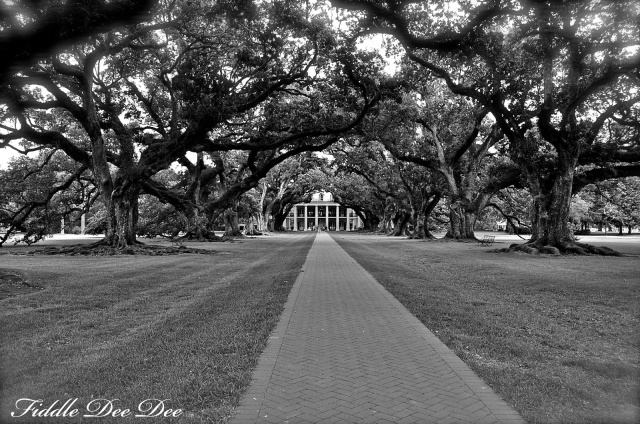 When guests first arrived at Oak Alley they met at the dock and were taken to the front parlour to relax and unwind a bit after their journey.


Here the men would enjoy brandy or sugar cane spirits made on the plantation while the ladies would indulge in a little seasonal fruit.  I know that seems sexist, but women were frowned upon for drinking spirits, especially in mixed company, but they would soak their fruit in liquor and enjoy it.

{History has proven time and again, women have a way to get what they want!}

Many traditions of the Roman’s French Creole background were shared throughout our tour of the home from the sharing a pineapple (which was a symbol of hospitality and warmth) to courting rituals.

The front parlor was also a space where the courting took place at Oak Alley.


I loved hearing the story behind the phrase “he got the short-end of the stick”.  When a gentleman would come calling a candle was lit in a coiled candle stick.  The candle was raised or lower based on how impressed the family was with the gentleman caller and when the candle itself burned to the first coil, your date was over!  If you had been fortunate enough to have the candle high in the coil you enjoyed a long evening with the family.  If a caller “got the short end of the stick” the candle had been set low and didn’t take long to burn to the first coil!  And the height of the candle was subject to change as an evening progressed and not necessarily because it burned down!

{I may need to try this with my daughters.}

The furniture in the home, although period correct, IS NOT original to the home or the Roman family.  In fact only a couple of dishes and a cradle in an upstairs room is all that did belong to the Roman family.

The dining room was spacious and beautiful in the home.  Boasting a 16-foot dining table The Roman’s  hosted many an elaborate dinner party for their guests. 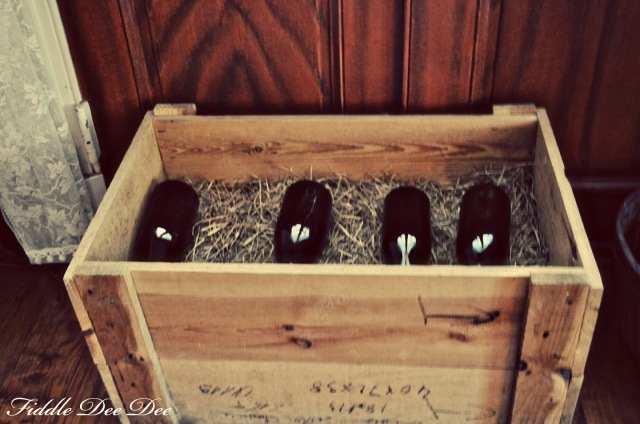 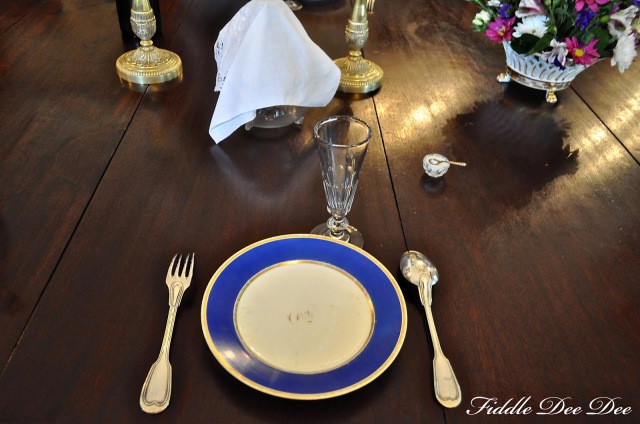 If you notice the silverware looks huge compared to the dishes, this was no accident.  The oversized silverware was a way that wealth and prominence was demonstrated.  Celina Roman was all about appearances which came back to hurt her and the family later in life. 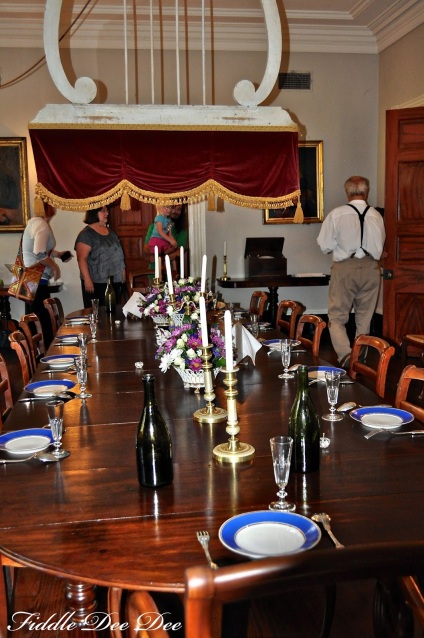 Over the top of the table was a large harp-shaped piece, known as a “shoo-fly” that provided a breeze to keep the family and guests cool during mealtime.  A young boy would occupy a chair in the corner and work the pulley to keep the fan working. 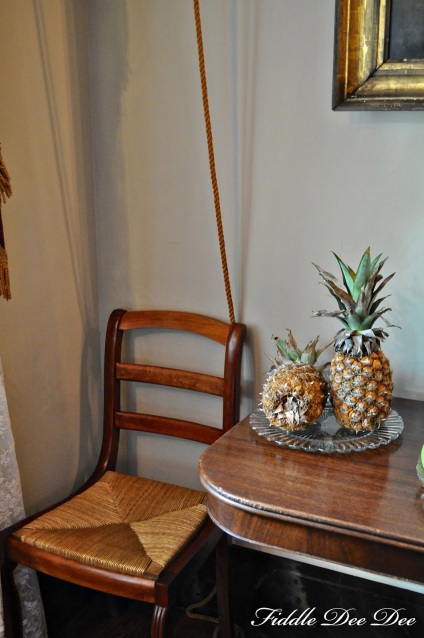 The two plates in the box are the only known original dishes belonging to the Roman family and Oak Alley.

The bedrooms were upstairs in the home.  One of the first rooms we were shown was a mourning room.  This was a room where sick family members stayed or a body was laid in state after death.  The guide we had never said if this room was used for anything else, but I would assume it was. 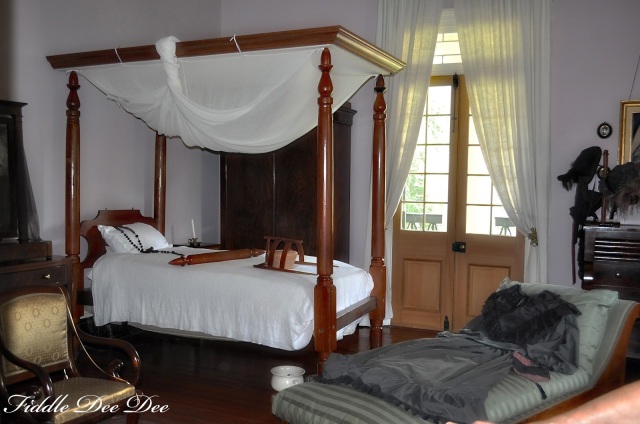 The Creoles were a very superstitious people so the mirrors were covered with black veils to keep the spirits from seeing themselves until the body was buried. 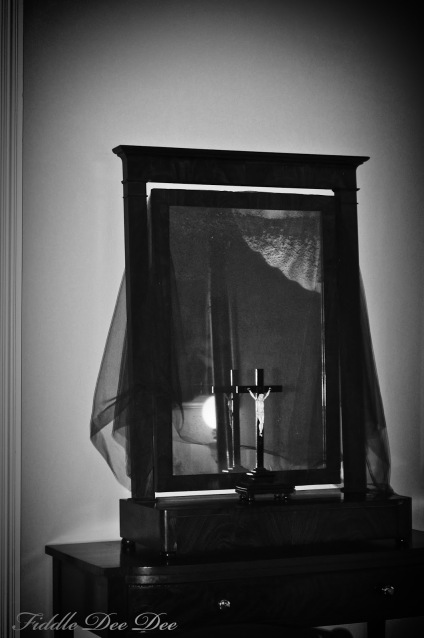 The rolling pin on the bed was a common item in the bedrooms.  Maids used them every morning to roll out and smooth the mattresses that were filled with horse hair and Spanish moss. 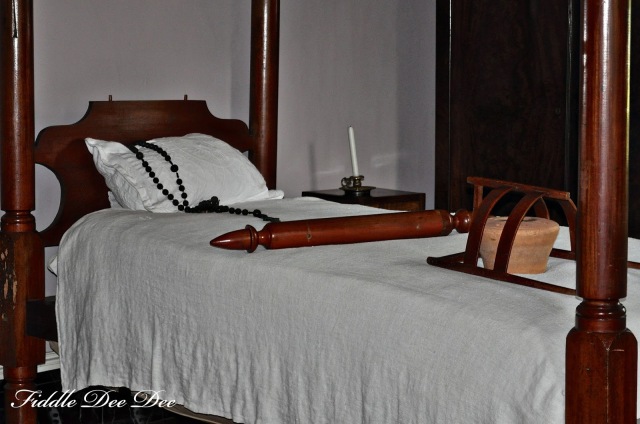 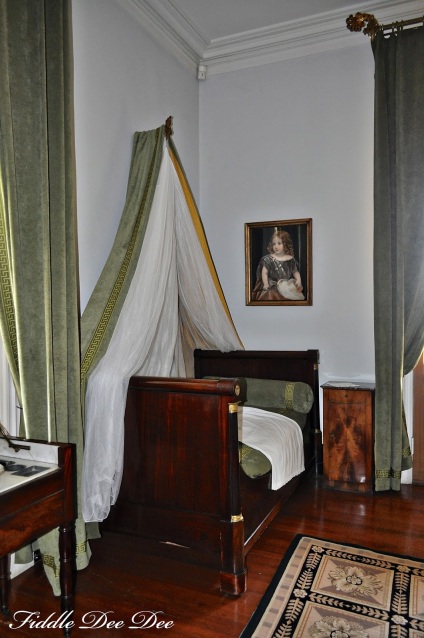 The other bedrooms were just beautifully decorated with period furnishings and accessories.  A children’s bedroom was so sweet, especially with the little dolls on display.  Children (even though they were wealthy) did not have the extravagance children today have. 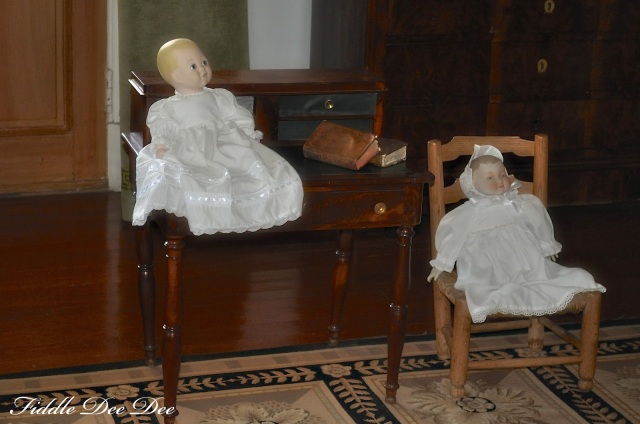 The Master/Guest room was beautiful as well, with a gorgeous Pineapple bed as it’s centerpiece.  As I mentioned before, the pineapple was a Creole symbol of hospitality so it played a role in many aspects of decorating. 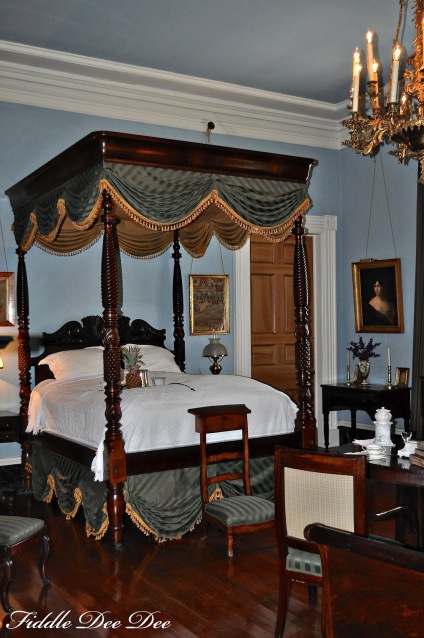 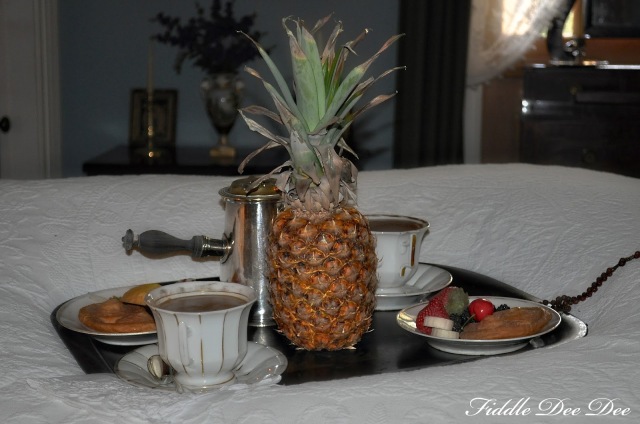 The beautiful cradle that is the only known surviving piece if the Roman family is also displayed in this room.  It held the six children birthed by Celina Roman. 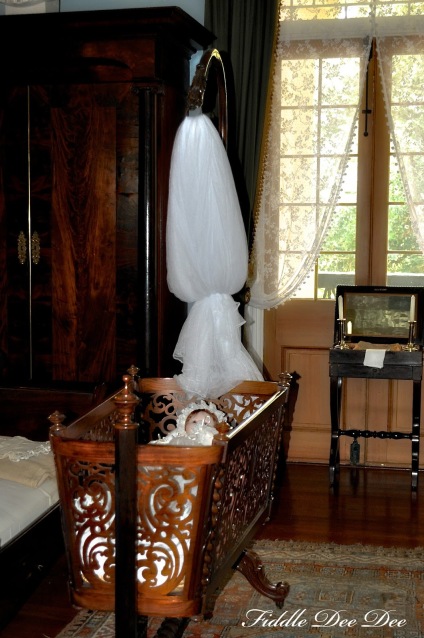 The family portrait wall shows the Roman family.  The three shadow prints are three of their children who passed away in infancy.

Jacques Telespore Roman died at the age of 48.  His widow, Celina returned to New Orleans, as she had never been happy at Oak Alley, leaving the plantation to be run by her son Henri.  With Celina’s extravagant spending, Henri’s lack of ability to run the plantation and the Civil War, the Roman family eventually fell into financial ruin.  Oak Alley along with all of its belongings were auctioned off for a mere $32,000, not even enough to cover the debt the family had.

Many others owned the plantation over the years, but it mostly sat abandoned.  As it sat abandoned the roof rotted, cattle made it their own shelter, destroying the beautiful marble floors and it fell into ruins. 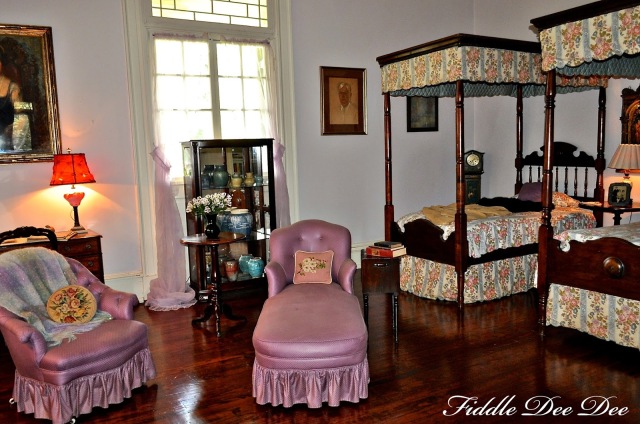 The final bedroom on our tour was the “lavender room”.  This room is the only one in the house that holds furniture that does not fit the period.  The final owner of the home, Josephine Stewart, used this room as her own until her death.  Her husband, Andrew, had purchased the home in 1926 in desperate need of repair. Together they restored this Mississippi River treasure, making Oak Alley a showplace again.  Mrs. Stewart also redesigned and restored some of the garden spaces. In her later yeas, after Mr. Stewart’s death, Josephine establish a foundation to preserve Oak Alley for the future.  She passed away in 1972, and in 1978, Oak Alley was designated a National Historic Landmark.

The grounds of Oak Alley are as beautiful as the house and so enjoyable to walk around.  You can sip an ice cold lemonade or mint julep while taking in the gardens and other points of interest of Oak Alley. 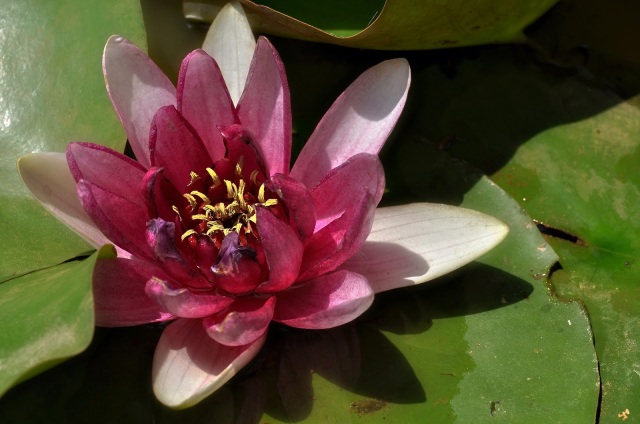 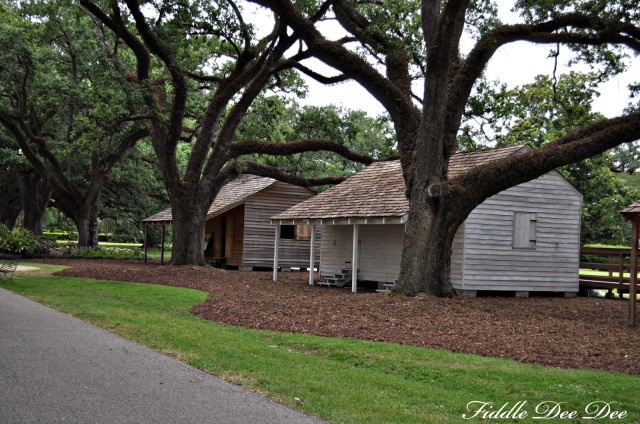 The Oak Alley Foundation is striving to preserve much of the history associated with the plantation.  They are painstakingly researching and rebuilding the slave quarters to give visitors a glimpse into slave life.

The location of the river was of most importance when sugar cane was originally planted here, so that exporting his crops was fairly easy and convenient.  Oak Alley was a 1200 acre sugar cane plantation, and to this day sugar cane is still grown and sold on this property.


We only had a little while to tour the home and a bit of the grounds before a huge thunderstorm hit, shortening our visit.  It was such a great trip back into time!  If you are ever in the New Orleans or Baton Rouge areas I seriously recommend that you take the time to do one of the plantation tours.

Next up on our vacation was dinner and cemetery tour in New Orleans!  If you would like to see what we did in Baton Rouge you can check it out here.

6 thoughts on “What I Did on My Summer Vacation: Oak Alley Plantation”