Last night I was invited to Pollo Tropical in Snellville for a tasting of new menu items that are hitting stores now!

If you’re unfamiliar with Pollo Tropical, it is what I call “upscale fast food” with a Caribbean flare.

Bradley described it even better when he said “that’s the place all the guys take their dates because it’s nicer than a burger place and still affordable on our budget.” Pollo Tropical is known for it’s marinated, grilled chicken (it’s really grilled) and their crispy pollo bites, but they are expanding their menu this spring with four new citrus marinated shrimp dishes. These were so flavorful and filling and quite the change from fried everything.

Pollo Tropical is known for using fresh ingredients and makes all their sauces and marinades in-house.

One of the most tasty dishes side dishes is balsamic marinated tomatoes. The marinade is made and allowed to sit for flavors to mesh, then tomatoes and onions are added and marinated for several hours for a truly flavorful treat! 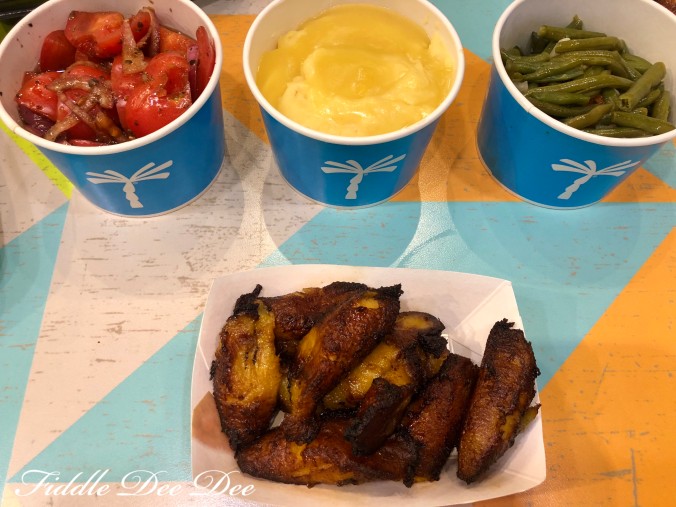 Other delicious side dishes include green beans, sweet potato casserole, fries, corn casserole (y’all, fresh out of the oven this is sooo good!), Mac & cheese, mashed potatoes and gravy; that’s just a few of their many options. Fried plantains are the perfect finish to any meal!

Pollo Tropical can be found throughout the Atlanta area and Florida which makes it an ideal stop as you hit the road to the beach for spring break and summer vacations! Check out these delicious options and others on the menu as well!

If you want to check out the menu in advance you can at pollotropical.com.