After spending nine days in Cuba, I now understand why Ernest Hemingway had so much love for the island where he owned a home and spent 30 years off and on (mostly on the last 10 years), and found much inspiration for his writing while living and traveling in this country. He left, partially over politics, in 1960, but always referred to Cuba as his home. It’s also where Hemingway wrote some of his best literary works. Aside from the drinking and women (both of which Hemingway was fond & obviously I am not), the music, vivid color surrounding you at every turn, passion of the people, simplicity of living, meticulously kept Fords and Chevys, and a lovely, strong people will draw you in. And despite the differences between those of us visiting and those who live there with their government dictated lives, the Cuban people are filled with natural pride for themselves and their country.

I had several run-on sentences forming in my own mind describing this amazing country as we spent our time there!

“Cuba is a country with no historical precedents: economically poor, but culturally rich; visibly mildewed, but architecturally magnificent; infuriating, yet at the same time, strangely uplifting. If the country were a book, it would be James Joyce’s Ulysses; layered, hard to grasp, serially misunderstood, but – above all – a classic.”

We spent most of our mission trip in Cienfuegos on the southern coast of Cuba. Known as the “Pearl of the South,” It’s the capital city of the Cienfuegos province and a bustling, busy city built around a bay. While much of Cuba has a Spanish influence, Cienfuegos was actually settled by French immigrants in 1819 and has actually earned status as an Unesco World Heritage Site due to its architecture and layout. It is a beautiful city and so unlike cities on other Caribbean Islands and even within Cuba!

“The colonial town of Cienfuegos was founded in 1819 in the Spanish territory but was initially settled by immigrants of French origin. It became a trading place for sugar cane, tobacco and coffee. Situated on the Caribbean coast of southern-central Cuba at the heart of the country’s sugar cane, mango, tobacco and coffee production area, the town first developed in the neoclassical style. It later became more eclectic but retained a harmonious overall townscape. Cienfuegos is the first, and an outstanding example of an architectural ensemble representing the new ideas of modernity, hygiene and order in urban planning as developed in Latin America from the 19th century.”

– UNESCO commenting on the Urban Historic Centre of Cienfuegos

Each morning we awoke in our Casa (B&B) to the sounds of street vendors making rounds on their bicycles selling their fresh baked breads, eggs, fruit and even flowers to homes and restaurants alike. Each had their own unique call to let potential customers know they were coming and what they were selling, many with regular customers waiting in the doorways of their flats to purchase what they might need for the day.

The last day of our trip, while Dad was meeting with the Cienfuegos preachers, Mom, Madeline and I ventured into downtown to see this lovely city we had been passing through all week. We had fabulous tour guides through our friends Oscar and Angelica as we strolled the city streets. Oscar is a 5th year medical student at Universidad de Ciencias Médicas.Cienfuegos (The University of Medical Sciences, Cienfuegos) and Angelica is in her last year of what we call high school.

During the day these streets are filled with pedestrians, bicycles, carts, buses, an occasional shiny classic car, dogs, chickens and even turkeys! When you head out you might ride in a cart, take a taxi, or walk, after all, that’s what most of the locals do! 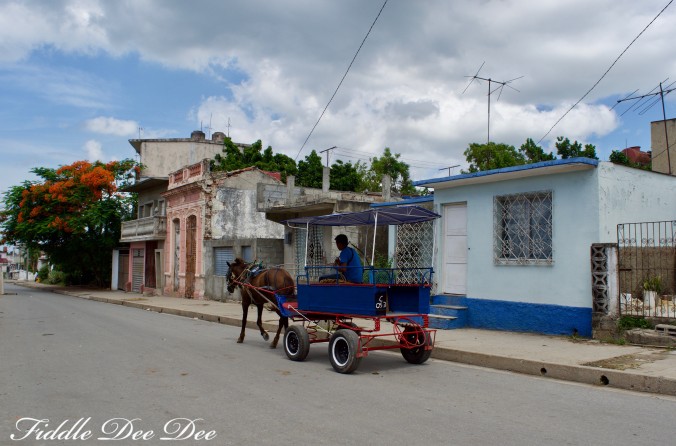 We took a stroll down the Prado with it’s eclectic buildings with beautiful facades, bright colors, and vibrant life, stopping to snap pictures and even shop a little and then headed down the pedestrian Boulevard where we enjoyed the Walking the streets of Cienfuegos you feel like you are caught up in a glorious time warp, yet it is 2017!

Here are a few of the highlights of our day sightseeing Cienfuegos.

Our Casa was in the area of Cienfuegos known as Punta Gorda. Two mornings I slipped out of the casa just after sunrise to explore the area. It’s very safe and such a lovely stroll. Punta Gorda is home to beautiful estates built by money in the late 1910s and 1920s. Many of these have been turned into restaurants, B&B’s or hotels now, but they are still stunning to look at. I also adore the natural chippy paints and colors some faded from the weather and others as vivid as if they were freshly painted.

Club Cienfuegos, once a Yacht Club is now the home of several restaurants with a variety of flavors. While we didn’t venture inside, I loved the beautiful lines and curves of this representation of a bygone era. Built between 1913 & 1917 the beautiful Palacio de Valle is now home to a restaurant, hosts cultural events, and is a museum.

The Palacio Azul (Blue Palace) is a former private residence built in 1921 for a tobacco baron. It was renovated in 2004 and turned into a hotel. While I didn’t have the time I’ve read that you can actually stop in for a tour as it was renovated to match it’s 1920s ambiance and is stunning! The Prado is the main thoroughfare in Cienfuegos. Here you will soak in a little local history, find shops, businesses, restaurants, and maybe the occasional parrot to talk to.

Cienfuegos was home to the famous Cuban bandleader and singer, Benny More’. It was a place he called home and stayed even after the Cuban revolution and many other musicians left. He referred to Cienfuegos as the “city he loved best.”  The statue on the Prado is a selfie stop, even for the locals. If you continue onto the pedestrian Boulevard you will find yourself at the Parque José Martí, a gorgeous city square. Off the square you will find the Benny More’ Cultural center featuring art and photography from locals. There is also a little cafe inside that is a great stop for a bottle of water or a soda made with real cane sugar!

The Parque José Martí (also known as the Plaza de Armas) is the heart of Cienfuegos City. Here the architecture is stunning and history abounds as you find Government buildings, the cathedral, theater and other gorgeous structures.…

Stop in at the old Cathedral de Nuestra Señora de la Purísima Concepción that was first begun in 1833 and finally completed in 1869! It is undergoing renovation right now, totally funded by donations.

Each of the stained glass windows are being sent one at a time to Spain to be restored, and locals are doing the structural work. The arts in Cuba are so important! Our friend Oscar was telling us about how wonderful the ballet is and the shows he has seen at the ornate Tomas Terry Theater. For just 2 CUCs you can wander around the horseshoe shaped auditorium theater built in 1888. 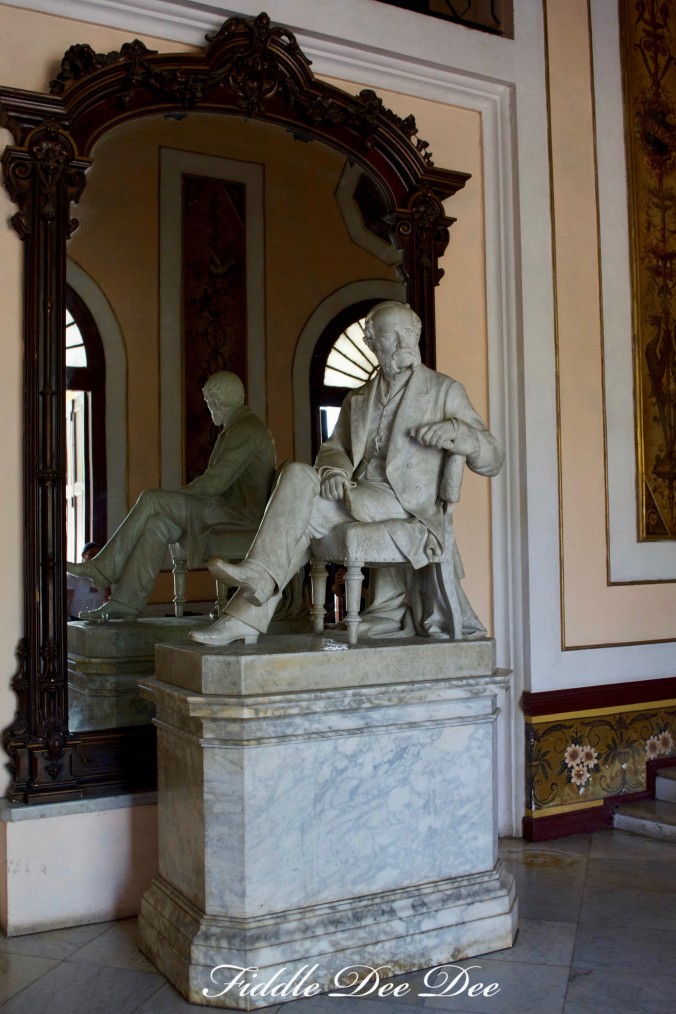 Tomas Terry who wanted the people of Cienfuegos to have access to the arts. We walked up to the top of  The Casa de la Cultura Benjamin Duarte (formerly Palacio de Ferrer), built in 1918. While it looks like it is falling down, this beautiful historic building is currently being restored to her original elegance and is just stunning, crumbling features and all. From the top we were able to take in a unique view of the Government building and city in general.

While the park, Prado & Boulevard areas are lovely the people here still live in poverty.  Even so, they are still a proud, hardworking people!

The Palacio de Gobierno or Government Building is  stunning as well. I could not find a construction date for this stately building, but is acts as the city hall of Cienfuegos and is not open to the public. I hope you’ve enjoyed this little pictorial journey around Cienfuegos.  There is so much more that I can share, but that is for another day.